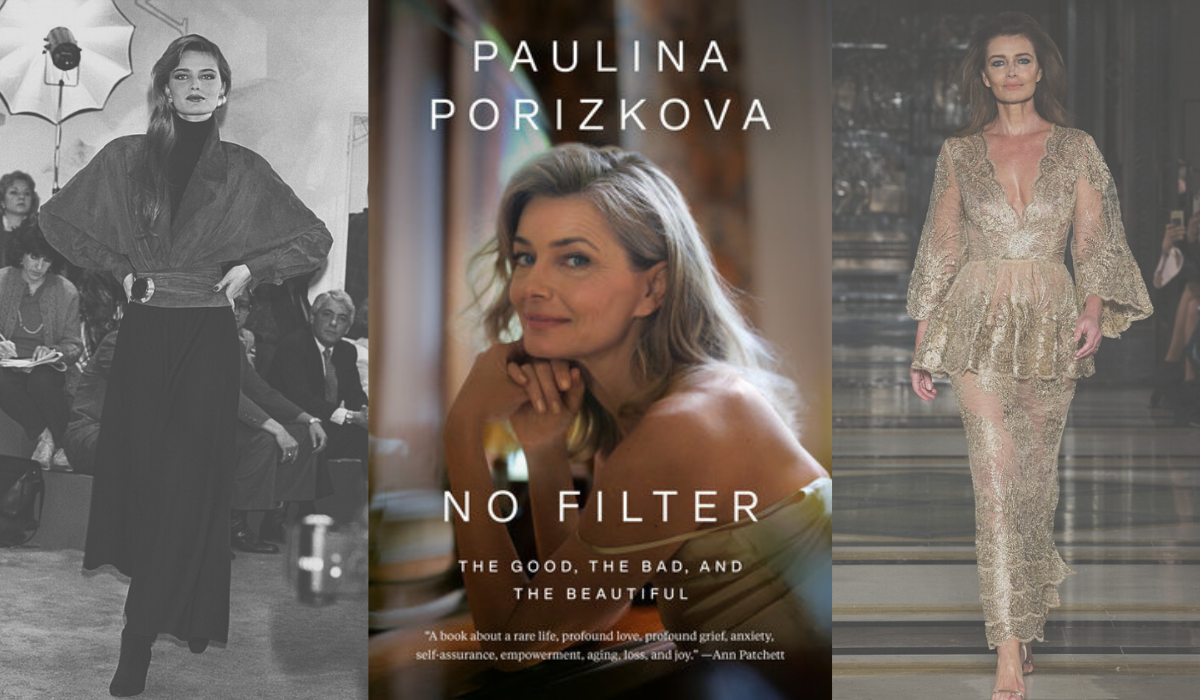 In Her New Book "No Filter," Paulina Porizkova Inspires All of Us to Feel Seen and Heard—No Matter Our Age

By Meghan Rabbitt November 12, 2022
Voices Above the Noise

When you look at Paulina Porizkova and see how she’s rocking life at age 57, you’d likely be tempted to ask for her secrets. Where does her confidence come from? What’s her best advice for charging into midlife and beyond feeling great? And what’s the workout routine that gives her those amazing abs?

But Paulina isn’t here to dole out her hard-won advice; she says we’re all too smart for that, too perfect in our own right already. Instead, she’s here to let us in on her innermost thoughts—her most vulnerable musings about both the high points and low points of her life and what she’s learned from all of those moments. That’s exactly what she does in her new book, No Filter: The Good, the Bad, and the Beautiful.

Her overarching message? No matter how old you are—or how invisible you feel because of your age—the best really is yet to come. In an exclusive interview with The Sunday Paper, Paulina shares the unfiltered details about her life as a supermodel, being seen but never truly heard, and how she’s learned to step into her power in her 50s.

A Conversation with Paulina Porizkova

In your new book you really put yourself out there so that you could be seen in a new way. What was your writing process like—and how does it feel to have it out in the world now?

I wrote this book quickly! Hemingway said, “It’s easy to write. Just sit in front of your typewriter and bleed.” That’s what I did. I let myself bleed. Every thought, everything in my head for the last few years, I let it all come out and thought, OK, then I’ll edit it. But once it was out, I thought, No, this is what it is. It didn’t take courage to write this book; the courage was in letting it be what it is.

Once I did this—once I put everything that had been crowding my heart and my brain down on paper—I could move forward. I had put down my luggage. And I think all of us can do this. You don’t have to put it down on paper. You could sit with your friends and a glass of wine and pour your heart out. Vulnerability allows you to set your bags down, and it opens you to the rest of what you want and need.

You’ve talked about becoming invisible once you started to look a little bit older—and how everyone from men on the street to shop clerks stop truly seeing you. What is your best advice to us as we get older for being seen—both by others and by ourselves?

There’s a distinction between seeing yourself and being seen by others. If you really want to see yourself? That’s self-acceptance. I’m at a point in life where I’ve had many days on this planet. I’m so lucky to have had all of those days—the good and the bad—because they informed me. Now, I’m in this stage I like to call well-seasoned. We start out as little tasteless blobs and now we are well-seasoned. Seeing yourself as you age is really about accepting that this is who you are, this is what you’re good at, this is what you’re bad at … you get perspective.

Yet as we age, we can become invisible to other people. If nobody sees you, or hears you, it doesn’t matter how much you know who you are because nobody’s taking notice. So, what do you do in that situation? You f-ing shout! You stomp your feet. You say, “I’m here. I’m not a wall. I’m not air. I’m here.” At a certain point, we can use all that seasoning life gave us to stand tall. We use everything we have earned, everything we’ve gathered, everything we’ve taken and been given and be brave enough to stand up for ourselves and to not let ourselves be dismissed.

I see some women who start doubting themselves when others doubt them. We start doubting our looks, because that’s the basis upon which we’re dismissed. Then we doubt that we’re worthy of being seen because we’re old and no longer attractive—and that makes us chase youth, with makeup and cosmetic interventions, so we’re not so easily dismissed. But I’m trying to see if there’s another way of achieving the same goal without fixing my face.

You’ve talked about the chance to see life right now as a fresh start. At a certain age, we aren’t raising kids anymore, or working our tails off, or even in the same relationships or friend groups as we once were. What’s your hard-won advice for really rocking this second act in our 50s, 60s and beyond?

I don’t want to advise women to do anything. The best thing I can do is offer an example of myself. I’ve been through a really hard time. I’m still trying to not be resentful of some of the tough things that have happened. But ultimately, everything is in your life for a purpose. You might not see that purpose until later down the line. I’m trying to live that and show you that with my vulnerability. I’m not going to tell you how to do it. What do I know about your life?

So, what are you loving about your fresh start?

My house burned down. I’m rebuilding from zero, but with a very clear idea of what kind of house I want this time around. It’s going to be mine. I know how to build it. I have all the tools to build this house. Yes, maybe I don’t have the same amount of energy and boundless hope as I did at age 17, but I know what it takes and I can make it my own and do it my way. This is really exciting to me.

What I realize now is that tragedy humanized me to others. I don’t think I was a very empathetic person when I was younger; that came with tragedy. I also think people didn’t truly see me as a whole human until shit happened.

Now, I have an ability to connect with people on a whole new level. I’m free to make the connections I want, and I know how to go about connecting. There are so many beautiful things that come with grief and heartache and trauma and all of that. And while I won’t say I’m grateful for it yet, I do feel like it was on my path for a reason.

In an interview with Maria for the Radically Reframing Aging Summit, you said, “In the U.S., we’re supposed to just kind of shuffle off to the side, into our suburban cars that are now empty because our children are in college … but we don’t have to do that. The way you present yourself and carry yourself is so important.” How do you take up space?

Sometimes I take up space by speaking. And if I’m not heard when I speak, I yell a little louder—which sometimes can be a nude Instagram post! Stomp your feet. Throw a pen. Show up naked. Claim whatever way you want to be heard.

Sometimes I take up space by listening. It’s interesting that you can actually claim space by being present for somebody, and really listening to them. This isn’t something I knew when I was younger—how much presence happens in listening.

When someone is grieving, most people want to run away. It’s uncomfortable. Or they throw a whole lot of platitudes at you—you know, “Tomorrow is a new day” or “Every cloud has a silver lining.” Yet that just makes the grieving person feel worse or feel like they should speed up the mourning process. And it’s all about you being uncomfortable. What a person going through tragedy needs is just your presence. Just say, “I’m here. I got you. I’m holding your hand. I’ll cry with you. You don’t have to talk, or you can. I’m just here.” That kind of presence is something I didn’t realize was presence until recently. If you’re actively listening, you’re extremely present. And somehow that listening becomes loud. You become important because of your silence.

What does it mean to live with “No Filter,” as you’ve titled your book? What is the gift of living with no filter, and how can more of us drop our own filters?

I’ve never really had a filter. This isn’t a secret; anyone who knows me knows I’ve always come unfiltered. It’s gotten me into trouble at times. I always believed in being painfully honest—stupidly honest at times.

But what I’m most interested in and write about is not so much the honesty piece of having no filter, but the vulnerability in having no filter. Living with no filter means actually putting yourself out there so you can get hurt. It means opening your heart with the risk that someone will crush it. No filter means not pretending that you’re strong when you’re weak or happy when you’re sad. Because when you are what you are and you put it out there, the thing you get back is connection. I always wanted and needed that. I got it in some quantities. But now? Oh my god. It’s a different world—a much bigger world than I ever imagined, populated with so many more people.

When you realize that every single person in the world—and I mean every single one—has a beautiful story to tell, it’s up to you to listen to it. And to find it. And you literally can. And that makes the world a bigger place for you.

It has for me.

Paulina Porizkova is a Czechoslovak-born writer. A former model, she was the first Central European woman to appear on the cover of the Sports Illustrated Swimsuit Issue in 1984. In 1988 she became one of the highest-paid models in the world as the face of Estée Lauder. She has starred in 16 movies and a slew of TV shows as an actress, and she has served as part of the judging panel on Cycle 10 of America’s Next Top Model. Her debut novel, A Model Summer, was published in 2007. No Filter: The Good, the Bad, and the Beautiful is her nonfiction debut.

Question from the Editor: Would you say you live your life with no filter? What’s one way you’ve found that being vulnerable helps you feel truly seen by others and makes you feel more connected as a result?