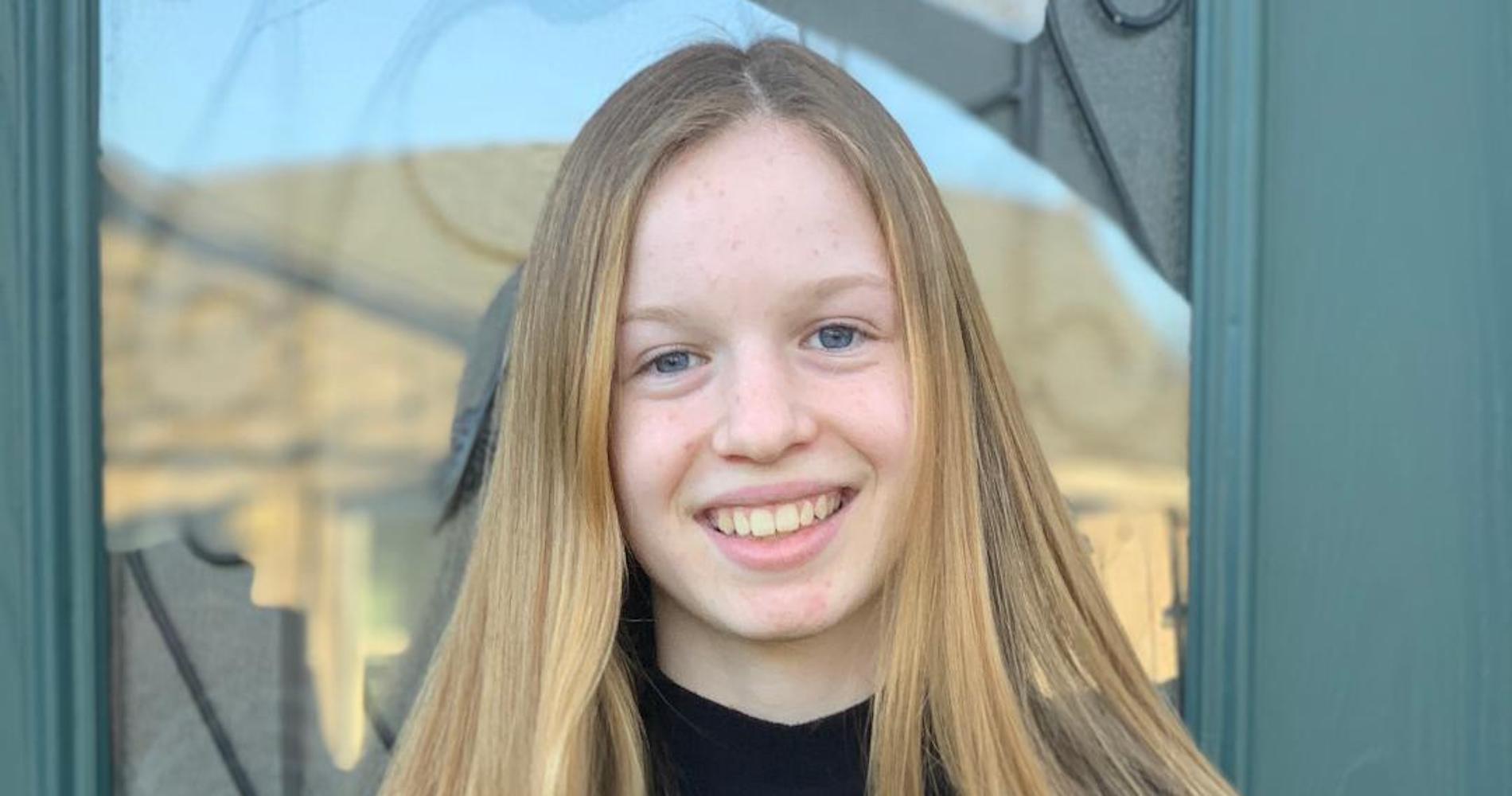 Kate was waiting for our interview in the tiny house she built in her parent’s backyard. She was dressed professionally for a 15-year-old: turtleneck with a black blazer and black slacks. There she sat at her painted plywood desk. Homemade lemonade and Thin Mint cookies, fresh from her Girl Scout cookie inventory, were set out in front of her.

I first met Kate Ainley-Zoll when I bought a multicultural cookbook from her that she’d created and published to raise awareness and funds for Women’s Empowerment, an organization helping homeless women through education and job training.

“It was the first big project that went further than I expected,” she said of the National Charity League grant project that earned her the President’s Award for over 100 hours of community service. “That’s when I realized that a small idea could be big for someone else.”

This time, it was a young woman like herself she had in mind.

As a creative person “who likes to know what my path is for the future,” Kate would Google careers like a film director, art teacher, or entrepreneur to see what they would entail. When she stumbled upon architectural engineering after sketching a miniature city she dubbed “Kateville,” she was disillusioned to see only faces of men representing the field “and it wasn’t relatable,” she explained.

It didn’t help that when she would tell her girlfriends about wanting to be an engineer, they were skeptical. “That’s kinda like a man’s job. Don’t you want to be an interior designer?” they suggested instead.

That’s when Kate decided on her next ambitious project. In the process of trying to earn the Gold Award for Girl Scouts by completing a project to change your community, she started collecting STEM (Science, Technology, Engineering, and Math) books to create a Little Free Library in an underprivileged community. After collecting books on dinosaurs, planets, geology, and zoology, she realized the books weren’t on people, they were on subjects. She wanted profiles, “To show there are actual people out there who do reach their dreams that weren’t just stories.”

“I wanted a book that told girls they don’t have to stop dreaming because there isn’t proof of their dream out there,” explained Kate.

So she’s creating one.

Titled, Portraits of Perseverance—200 Women in STEM, Kate created a survey to send out to a diverse group of women in the STEM fields hoping to gain insight and answers on how to make the path forward wider and more inclusive. She asked friends and relatives to send it out. She signed up for LinkedIn seeking out female chemists, engineers, scientists, computer technologists, and mathematicians. The responses came pouring in accompanied by portraits of faces she could relate to.

A zoologist invited Kate to the San Francisco Zoo. She toured a 3D printing company in Tempe, Arizona. She received an invitation to learn hands-on from a pilot. She heard back from a botanist, a hydrogeologist, a marine biologist, a game designer, a criminologist, and even a NASA scientist.

STEM women told stories of overcoming challenges like homelessness, autism, dyslexia, and little to no support or resources to achieve their dreams of becoming who they knew they could be.

When Kate showed me the profiles she has been editing and formatting I saw inspiring faces: young and seasoned, women of ethnicity, in highly decorated military uniforms, women in pilot headsets, lab coats, wearing a hijab, posing with an owl, a whale, a giraffe in the savannah.

When I asked Kate if any one profile inspired her the most, she couldn’t pick one. Seesawing between all the possibilities she said, “I just want to be part of a movement that makes the world a better place.” She was also delighted to find she had created “a gold mine of information for any girl who wishes to explore STEM as a way to contribute to our world.”

Kate recently donated Portraits of Perseverance binders to the Tracy Unified School District in San Joaquin County. The district plans to feature them in a new STEM Center under development.

Realizing, “This could be so much more!” she would also like to get Portraits of Perseverance “into the hands of every girl on the planet!”

Currently, she is searching for a publishing avenue—all while being an honor roll student, cheerleader, belonging to civics clubs, and doing gymnastics, Mock Trial, and the EPI (pre-engineering) program at El Camino High School in Sacramento.

When I asked Kate what drives her to be so ambitious, she replied with conviction. “When I grow up, I just want to have done something good.”

Learn more about Kate and her project here.