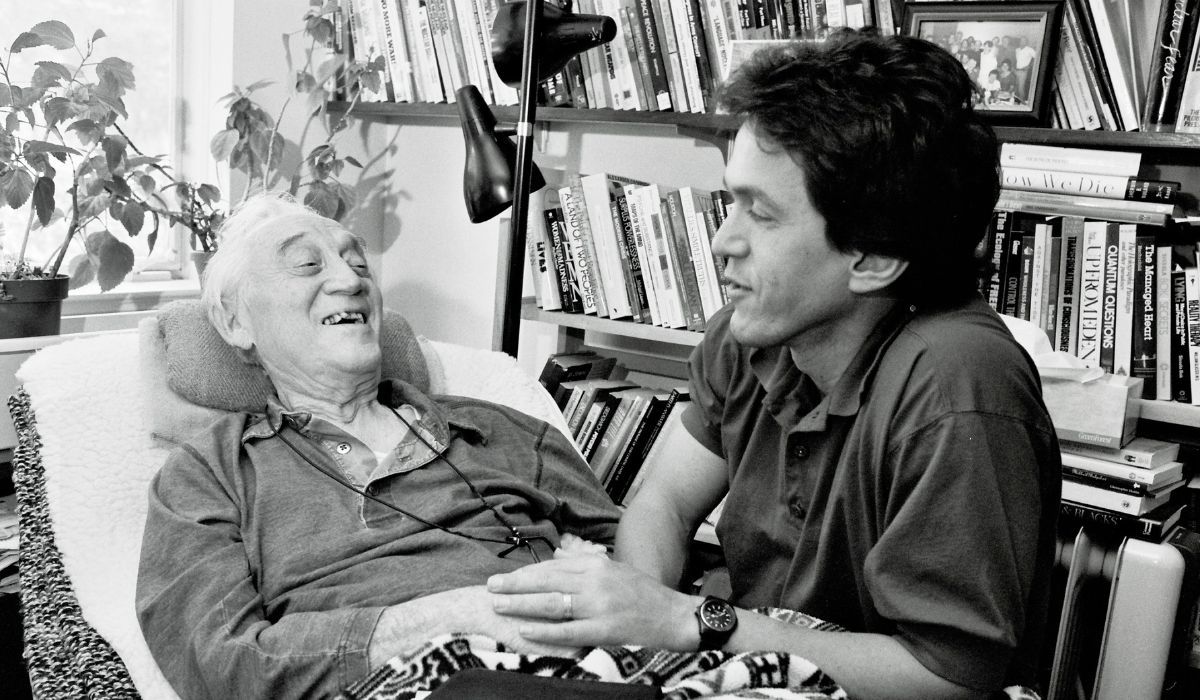 It's Been 25 Years Since Mitch Albom Published His Legendary Tuesdays with Morrie. In This Exclusive, He Reflects on Why Its Message Is More Relevant Today Than Ever

By Stacey Lindsay September 10, 2022
Voices Above the Noise

Twenty-five years ago, Tuesdays with Morrie was first published. In the memoir of unparalleled scope, best-selling author and journalist Mitch Albom chronicles his meetings with his beloved college professor Morrie Schwartz, a man dying from ALS. Their conversations cover the greatest of life’s pillars: love, death, commitment, regrets, aging, fear, and more.

At its roots, Tuesdays with Morrie is about the power of seeing what matters. It’s also about relationships and how we can have some of the deepest with those much younger or older than us. Schwartz was in his late 70s during their conversations. Albom his 30s. Their connection was kismet and rich as Schwartz told Albom—and ultimately the world—his greatest life learnings.

In the two and half decades since its initial release, Tuesdays with Morrie has sold nearly 18 million copies and been translated into almost 50 languages. Albom, who chatted with me from his home in Detroit, was busy caring for one of the many children he and his wife, Janine, help to care for via their orphanage in Haiti. As we discussed the book’s 25th anniversary, I shared with Albom that I first read Tuesdays with Morrie when I was in high school. Now, in my early 40s, I again picked up the book—light in size and page count but beautifully raw from the start—to find greater meaning in it today.

Perhaps that’s because I’m older and more sentimental. Or, like Albom, I have lost a life-changing mentor 40 years my senior, a death that's punctuated my life. Or maybe it’s because this grand memoir is what I—and I believe we all—need right now: A reminder that our time here is fleeting, so we must grab the beautiful truth of it with both hands, every second we have.

The following conversation has been edited and condensed for clarity.

A CONVERSATION WITH MITCH ALBOM

Earlier this year, you posted on Instagram a sentiment around death. You said that when we lose a loved one, we always think God took them from us. But you suggest we reframe our thinking to: What did I do to merit their love? Will you elaborate on this?

That is from The Stranger and the Lifeboat, the latest book that I wrote. The premise is there are 10 castaways in a life raft from a boat that exploded. They’re out on the sea when all of a sudden this body floats up and it’s a man who claims to be God. They don’t believe him, but eventually, they start asking him questions. One is: Why did you take my wife? The man who claims to be God says, ‘Why did you humans always say, God took somebody they loved? Maybe a better question would be: Why did God give them to me?

That came to me after we lost our little girl Chica who we adopted from our orphanage. She got a brain tumor and died at five years old. I was very angry with God and the universe for taking her. When I wrote a book, it was very cathartic because I was able to tell stories that were good about her. When you sit around at a funeral after the services, you tend to remember the funny things, the light things. In one of the last lines of the book, I wrote, we didn't lose a child. We were given one. And she was magnificent. That was a turning point for me. So this is all about starting to think about the things—whether it's a job, a loved one, a situation—that come to an end as how lucky we were to have had it for the time we had it. This way you're in a perpetual state of gratitude.

That speaks to what Morrie Schwartz taught you and readers about detachment. In Tuesdays with Morrie you write how he taught you to really feel emotion but then to know it doesn't have to overcome you.

I thought that was one of the most valuable and subtle lessons of Tuesdays with Morrie that people sometimes gloss over. It’s a difficult word, detachment. It’s not as easy as saying forgive. Morrie would tell me that every morning he would wake up and it would hit him that he was sick. So he would give himself 45 minutes to just be angry at his situation. He would cry. But then he would stop. He would detach and say, ‘okay, that, that screaming, that crying, that anger that's grief, that's sadness. I'm identifying it as a human emotion, but I also know that there are other human emotions. And I can go on to them now because I'm not going to be a victim of this.’

I always liken it to when we get a cold. I’ve said that the first person on earth who got the first cold must have thought I'm dead. My nose is running, and my throat hurts. But now when we get a cold, we know it will last a few days but we will get past it. If we could do the same things with our emotions and say, ‘okay, this is grieving but it won't own me and it will pass’, then we could detach from it and see it for the emotion that it is. Morrie was good at that. People who grasped that lesson from Tuesdays with Morrie benefit from it.

During one visit you and Morrie talk about regrets. Morrie said that we don’t stand back enough and think: Is this all? Is something missing in my life? He told you that we all need someone to push us in this direction. Who is pushing you these days, Mitch?

To be honest, that's probably the biggest void I have in my life now. As you get older, those mentors you look to probe you are going away. Morrie died. I've had other older people in my life I looked up to who have passed. Then you’re becoming a person that people are coming to you for advice, like the kids in the orphanage, and my nieces and nephews. This is lovely, but there's still that part of you that says, but who's checking me? Who’s asking me the question? Who's probing me? In my life, it’s my wife and my immediate family members. It’s also myself. I have an internal dialogue of constant probing. But I miss the old people in my life. I say that to Janine all the time. I miss those people—a lot.

In your afterward for the 25th edition of Tuesday with Morrie, you share the original pitch letter you sent to the publisher. In it, you hit a chord that still rings true today: You say people are burned out more than ever. What are you seeing today that we all are seeking?

This is the reason why Morrie’s words are timeless and why the book continues to reach people. Death is timeless. What Morrie shared with me in those final months of his life wasn't 90s-ish. It wasn’t of the decade. It wasn't of the time. It was human. It was what a human being thinks about and considers and evaluates when they are looking death in the face. And that I don't believe has changed since the dawn of time. Once humans became aware of being self-reflective, I think everybody who reached the end of their life started to look back and think, did I do what I wanted to do? Was it a happy life? What if I could do it over again?

Whether Morrie said these words to me in 1995 or whether you’re reading them in 2022, those things about forgiving people who you love and nobody's going to take care of you the way your family will and your job isn't going to—these are all things that are going to be true 120 years from now, too. The crazier our lives get, this will be true. I would also point out the more social media that we are falling victim to, which didn't exist when Morrie was talking to me. There was no Instagram. There were no likes and dislikes. What he said about feeling detached from one another and not getting caught up in what everybody else is caught up in is so true today.

Morrie taught you there's no such thing as too late in life, and that he was changing until the day that he said goodbye. Will you reflect on this?

That’s the most hopeful sentence that anybody could ever say to anyone else: You can change until the day that you die. Because we're all imperfect and we all find flaws within ourselves. But despair comes when you feel like you can't do anything about it. So the idea that it's never too late, that you can be in your 70s and come to a different frame of mind, that is the personification of hope. I live with that and I like to think that I'm a hopeful person. And I remember there was a critic once who was trying to poke fun at my style of writing. The critic said he's the king of hope. And, and I remember thinking, I’ll take that! That’s the way we get through life, is to believe that things can be better. And I do.

Morrie also showed us that age is only a number. And so many people who would've been afflicted with what Morrie was afflicted with would have said ‘there’s no point in being good.’ Morrie took the opposite approach. He thought, now that I know I’m going to die, let me be the brightest leaf on the tree before it falls off.

I remember asking Morrie, ‘Why don’t you let people be sympathetic to you? You’re the one who’s dying but instead, people come in and you start asking them about their life, their problems, their love, and their work. It's like a therapy session for them.’ Morrie said that if he did the opposite and took from them, that would make him feel like he was dying. But when he gave, it made him feel like he was living.

I never forgot that.

Mitch Albom is an internationally renowned and best-selling author, journalist, screenwriter, playwright, radio and television broadcaster, and musician. His books have collectively sold more than 40 million copies worldwide. You can learn more and order the 25th edition of Tuesdays with Morrie at mitchalbom.com.