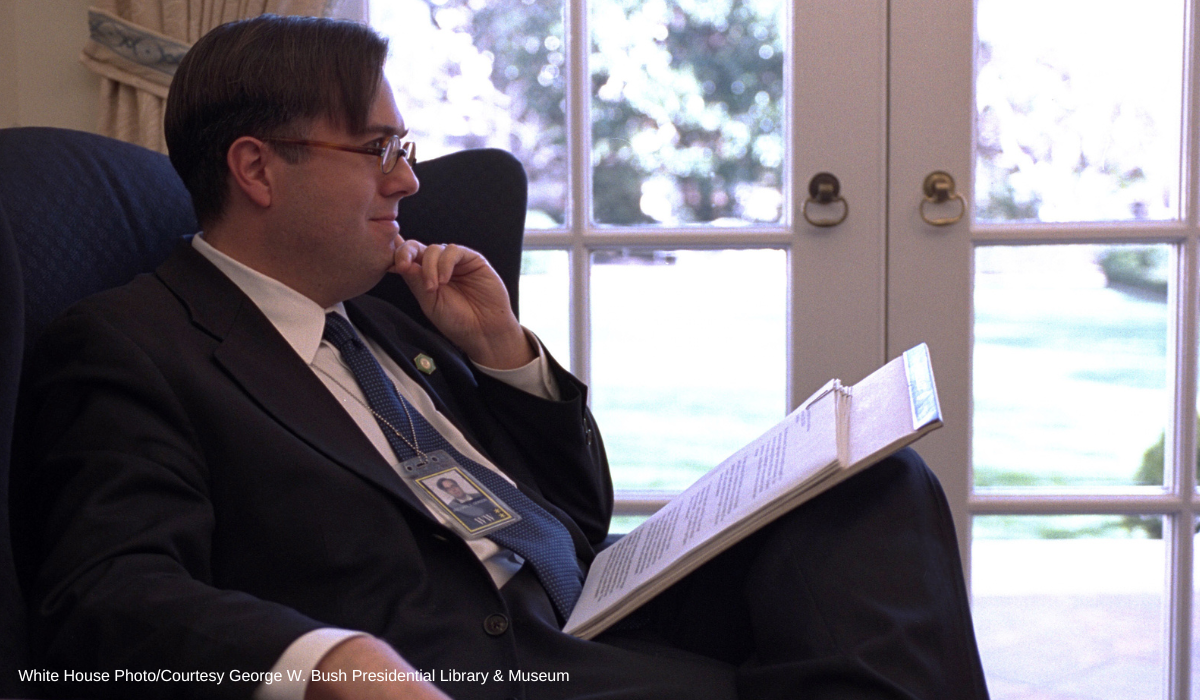 The Gift of Michael Gerson

By John Bridgeland November 19, 2022
Voices Above the Noise

As we move into the Thanksgiving season, we are full of gratitude for our families and friends.  When Mike Gerson, a glorious human being whose heart matched his mind, passed away on November 17, the nation lost a great gift.

The first time I met him on the presidential campaign, Mike Gerson was chewing on the cap of a pen and writing in script no one could read.  It was an inauspicious start.  The speech he then shared in type was so beautiful, and his writing so elevating, we called him the “Ted Sorensen of our generation.”

As the lead speechwriter for President George W. Bush, Mike moved a nation and world with his pen.  I hear the echoes of his writing now, with the first speech on the campaign launching Compassionate Conservatism in July 1999:  “Our country must be prosperous. But prosperity must have a purpose. The purpose of prosperity is to make sure the American dream touches every willing heart.  We are a wealthy nation. But we must also be rich in ideals – rich in justice and compassion and family love and moral courage.”  How the nation could use that centering today.

In the first Inaugural Address, there was a summons to the American people echoing JFK’s “ask not”: “I ask you to be citizens:  citizens, not spectators; citizens, not subjects; responsible citizens, building communities of service and a nation of character.”

On 9/11, we were evacuated from the White House together and we shared ideas for what the President might say that night.  Mike spun straw into gold, “A great people has been moved to defend a great nation.  Terrorist attacks can shake the foundations of our biggest buildings, but they cannot touch the foundation of America.  These acts shattered steel, but they cannot dent the steel of American resolve.”

Mike also cared deeply about the vulnerable around the world.  He was the one on senior staff who urged the President to create the President’s Malaria Initiative to save the lives of mostly mothers and children in sub-Saharan Africa, even though there was no domestic constituency for a disease that had been eliminated in the United States decades ago.  And he was behind the President’s Emergency Plan for AIDS Relief.  Both initiatives have saved tens of millions of lives.

I remember being with Mike in Victoria Falls, Zimbabwe on a trip to examine malaria control.  He contrasted China’s self-interested investments in Africa to those of the United States in a Washington Post column – “In much of sub-Saharan Africa, the American image is now defined by the Peace Corps, by PMI and by PEPFAR, the American AIDS relief plan. It is a form of influence that is hard to measure or weigh. But people remember when you help to save their children.”

And I remember traveling with Mike and Tim Shriver to Lilongwe, Malawi for a Special Olympics summit with leaders across Africa.   Mike wrote a column entitled Praise These Olympians and ended with these words, “honoring the dignity of the most vulnerable strengthens the ideal of human dignity itself.  And nation’s that adopt this non-utilitarian ideal cannot view the rule of law, cultural norms or economic justice in quite the same way again.”

Beyond the marvel of his remarkable pen, he was a person who loved his wife and sons, who would send videos of his puppy softly touching the window, and a human being who opened his heart and soul to share his bout with depression and his yearning for a loving God.  For anyone, particularly the young, who have experienced depression and anxiety, watching Mike’s Washington National Cathedral Sermon in 2019 will bring you comfort.

One of his final gifts was to share these words in his Sunday sermon from the cathedral he viewed as his spiritual home:  “we know that transcendence sparks and crackles around us, in a blinding light, in a child’s voice, in a fire, in tears, in a warmed heart, in a sculpture just down the hill, if we open ourselves to seeing it.  We know that love is at the heart of all things….God’s promise is somewhat different.  Even when strength fails, there is perseverance, and even when perseverance fails, there is hope, and even when hope fails there is love, and love never fails.  So how do we know this, how can anyone be so confident?  Because we are Lazarus and we live.”

John Bridgeland served with Michael Gerson on the 2000 Presidential campaign and in the White House in the first term of President George W. Bush.  They worked together for over 20 years.