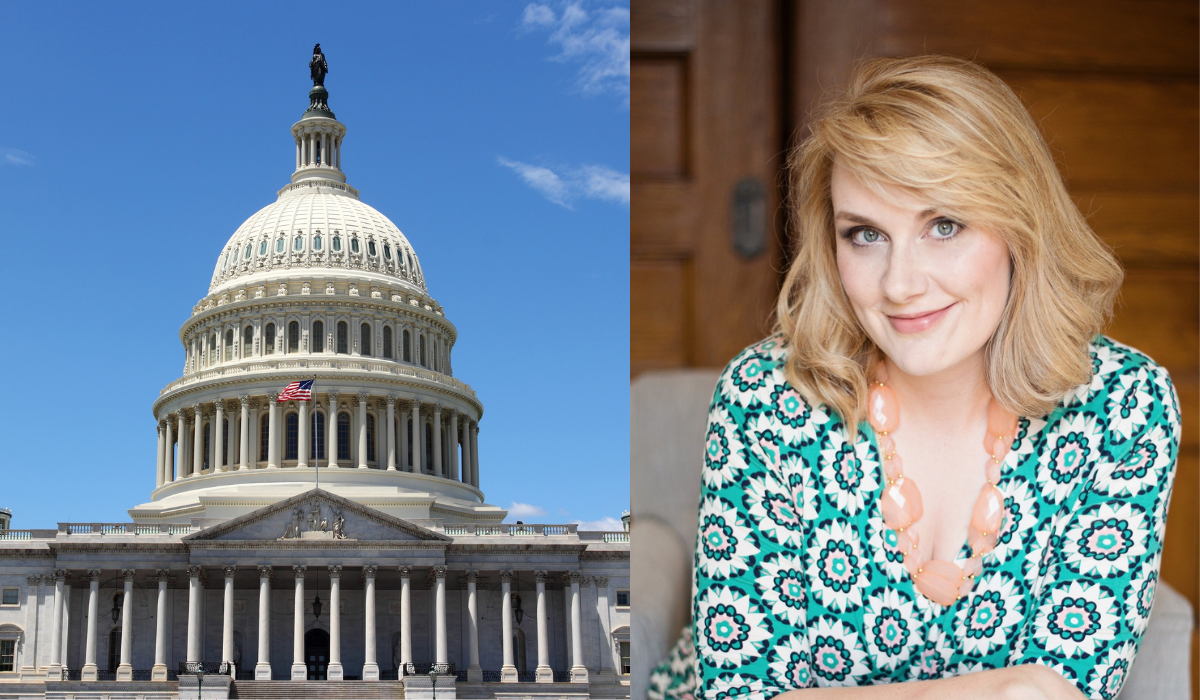 The Midterms Are Behind Us—Yet Our Political Divide Remains. Here’s What America’s Government Teacher Wants Each of Us to Know

By Meghan Rabbitt November 12, 2022
Voices Above the Noise

Sharon McMahon (a.k.a. Sharon Says So) puts the midterms in perspective

That’s a big statement, given our era of great political divide—a time when most of us, if we’re being honest, feel like politics have become deeply entwined with our personal identities.

Yet McMahon—who more than a million Americans know as @SharonSaysSo on Instagram—is a good gauge of where we stand as a country in the wake of the 2022 election. That’s because she’s on a mission to combat political misinformation by sharing non-partisan facts about our democracy, and she’s created a community where Republicans and Democrats alike talk about political issues with kindness and compassion.

The Sunday Paper sat down with McMahon to talk about what all of us can take away from the recent election, what she’d say to those who feel disheartened about the political process, and more.

A Conversation with Sharon McMahon

What are some of your big takeaways from the 2022 midterm elections?

One of the most important things that happened is that we started to see the pendulum swing back to a more American normal. For hundreds of years, it’s been our norm that when someone wins an election, they celebrate—and when someone loses, they concede. The candidate who loses congratulates the winner and assists in the peaceful, orderly transfer of power. This is such a crucial component of American democracy. We’ve always prided ourselves of being a beacon of this transfer of power. To me, it was gratifying to see a swing back in this direction.

Yes, there are a few races still to be called. But overall, the mode seems to be this: We need to preserve and protect the democratic processes that are integral to who we are as a country. Because without them, we have nothing. It doesn’t matter who wins if we don’t have democracy.

After these midterms, I’m hopeful. We can begin talking about issues of policy, and issues of significant importance—and there are many we need to talk about both domestic and abroad. Even if I didn’t like every person who won, that’s democracy! You win some, you lose some. It’s how it’s always been, and it’s how it’s meant to be.

We’re hearing a lot about how our democracy is fragile. Do you believe this is true?

Yes, by its very nature democracy is fragile. It is true that America finds itself at a crossroads, and we must choose which direction we will turn. We can turn toward our democratic ideals—which means sometimes, your candidate will lose—or more toward authoritarianism, in which one group retains an outsized amount of power and it becomes increasingly difficult for a different party to attain power.

I’m encouraged by the midterms because I’m seeing a doubling down on a commitment to democracy—that nothing is more important.

What would you say to those who feel disheartened by politics right now? Why is it important to still stay involved—to care?

I hear this all the time—people feel like nothing they do makes a difference or truly matters. It’s a normal and common way to feel in a huge country with a lot of angry voices yelling at you all the time. It’s easy to feel discouraged. But I urge everyone to remember that most of the important things that have happened in the U.S. haven’t happened because of some incredible world leader, or someone riding in on white horse to save us. They’ve happened because ordinary Americans have had the courage to move forward despite incredible obstacles.

I’d also encourage people to remember that while it’s not your job to fix everything, that doesn’t absolve you of responsibility. We all have an important contribution to make. Some of us have huge platforms—and some of us are nurses and teachers and stay at home parents. All of our contributions are desperately needed. Our job is to do what we can where we are with the resources available to us. All of us doing something small will have a far greater impact than a handful of people trying to do everything. Because a few heroes can be taken out; a few heroes are easy to discredit. But it’s impossible to discredit the work of millions.

Don’t think your small contributions aren’t moving the needle. The world is waiting for you to do what you can.

When you look to the future, how do you stay hopeful and feeling inspired about our political process? What would you say to those who are already dreading the 2024 election?

I always look to history to feel hope. I find examples of things that happened in the past and look at ways people have overcome. History gives us a great community of people from which to draw hope and inspiration.

When we look back on America’s past, we see times of incredible adversity. America has endured much in its short history. We also see incredible resilience, an ability to band together, and incredible unity. We also see times when Americans have reinvented themselves. Americans are known on the world stage for coming up with new and interesting ways to do things. We’ve always been ingenious. I have faith in who America is and I have faith in Americans. We have lived through worse.

If the next presidential election feels scary, I’d encourage people to think about this great community of ancestors who’ve lived through incredible adversity and paved the way for the rest of us to continue carrying their torch forward.

We can do that. It might be challenging. But we can do hard things.

As “America’s Democracy Teacher,” what do you want Americans to know right now?

Democracies require multiple healthy political parties. When you start feeling animosity toward a party other than your own, remind yourself: This is the natural order of things. A political party who opposes your viewpoint helps to protect your freedoms. Power is a corrupting force; we need people on the political stage who oppose the party in power. It may feel uncomfortable. But that opposition preserves our freedom.

Many of us are dreading politics coming up at holiday gatherings. What’s your best advice for navigating conversations with people who hold very different political views than our own?

Tolerating discomfort is important. We cannot work for each other’s mutual destruction. Remember, to work to destroy another political party destroys the fabric of America itself. We’re supposed to have conflict; hopefully that conflict will lead to better ideas and help us avoid groupthink, which can be both theoretically and physically dangerous.

Having more than one viewpoint is something we need to not just tolerate, but to celebrate. It helps us become better people, and to be an example to the rest of the world. It proves that you can have an ideologically diverse country that has the peaceful transfer of power.

At those holiday gatherings, remember this: In order to be understood, you must first seek to understand. When you’re listening to someone else talk about something and you strongly disagree, listen to understand. There’s a good chance it’ll soften the other person’s heart and make them more likely to listen to you.

Listening to understand doesn’t obligate you to agree with someone. It just means you try to understand where that person is coming from. That act helps calm the rhetoric; it helps smooth out some of the choppy waters. And it’s also tremendously useful—both personally and for our country.

Sharon McMahon is on a mission to curate facts, fun, and inspiration by educating Americans on democracy, politics, and history. After years of serving as a high school government and law teacher, Sharon took her passion for education to Instagram with a mission to combat political misinformation with non-partisan facts. Sharon has earned a reputation as “America’s Government Teacher'' and quickly amassed over a million social media followers. To learn more, visit sharonmcmahon.com.

Question from the Editor: How do you feel after last week’s midterms? Are you hopeful for our democracy—or not quite there yet? How will you “listen to understand,” as Sharon McMahon urges us all to do when talking to those with whom we disagree?